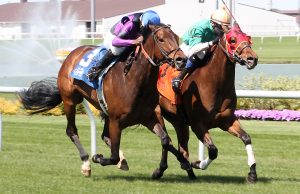 Rain has plagued the Central Indiana area for the past three weeks, moving several races off the turf course at Indiana Grand. However, the sun was out bright and the first turf race of the 2016 racing season was contested Wednesday, May 18, giving Divine Thunder and Jockey Malcolm Franklin the nod for the win.

A field of eight assembled on the turf course for the $34,000 Allowance event running five furlongs. Divine Thunder broke in mid pack and quickly retreated to the back as race favorite Flying Eagle and Leandro Goncalves quickly moved into the lead from the inside. There was constant pressure applied to the top spot of the tightly packed field with Rojo Mojo and Cory Orm sitting in second early on followed by Read the Cards and Ron Hisby three-wide in third.

The field became even more tightly packed around the turn and in the stretch, Dynamite Stick and Marcelino Pedroza took over the top spot. Divine Thunder was in full gear and began to chase down Dynamite Stick. The two matched each other stride for stride in the final steps of the race. Dynamite Stick was not giving up any ground. However, Divine Thunder got the head bob at the end to win by a nose in a time of :59.01. Andy Po Po and Richard Bracho rallied from the back to finish third.

“I was a little surprised he (Divine Thunder) ran so well today,” said Franklin. “He’s a big horse and coming off route races at Oaklawn Park, I thought he would be farther back. But Randy (Matthews) said he’s been training good. He came up on Marcelino’s horse (Dynamite Stick) and I thought he was going to draw away from him, but Marcelino’s horse dug in. I had a little momentum and this horse wasn’t giving up. He really dug in late.”

Divine Thunder now has eight career wins in 26 career starts. He boosted his career earnings to more than $135,000 with his latest win at Indiana Grand, his first over the turf.

“I galloped him (Divine Thunder) two times but this is the first time I’ve ridden him in a race,” said Franklin. “He’s pretty tough to gallop, but I like him.”

Divine Thunder showed true grit and determination to provide Ten Strike racing with an exciting finish and another win.