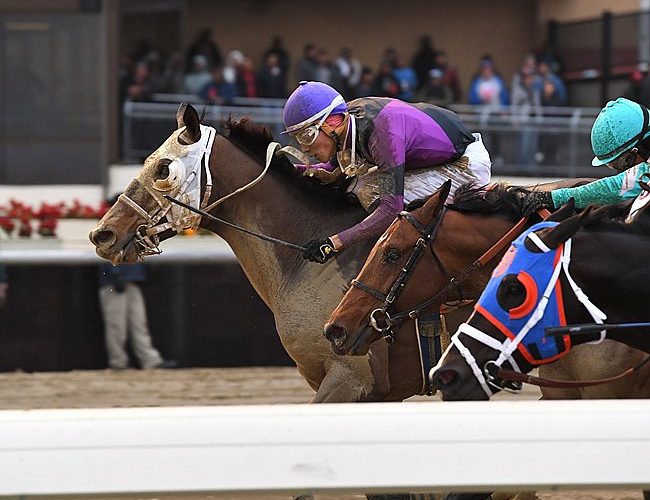 Ten Strike Racing’s Zanotti shipped outside Parx Racing for the first time since 2016 and found the going at sloppy Aqueduct Racetrack to his liking as the Gio Ponti  gelding rallied on the outside to post a neck victory in the $125,000 Queens County Stakes at 38-1 odds.

Settled in mid-pack by jockey Jorge Vargas Jr., Zanotti stalked comfortably in fifth as favored Alex the Terror led the field of nine through fractions of :24.33 for the opening quarter-mile with the half-mile in :48.47. At the quarter pole, Alex the Terror remained in front as Zanotti angled four-wide into the upper stretch and began passing foes. Zanotti collared Alex the Terror at the sixteenth pole and they engaged in a battle to the wire, with Zanotti securing the win with the last bob.

Trained by Juan Carlos Guerrero, the 4-year-old picked up his first black-type win Saturday and improved his record to 7-3-2 in 18 starts, with earnings of $251,904. The Queens County was the first start for the winner since he took an optional-claiming allowance at Parx July 25.

“First of all I have to give a lot of credit to Carlos Guerrero,” Vargas said. “He brought this horse with his ‘A’ game. He hasn’t run since July, that was my main concern, but he was training so good. When I asked him to take a shot, he was all out for me. I thought he was going to be a little sharper (out of the gate) than he was, so I just let him flow out there and he just put me in the right spot. Good trip. When I angled out he just took off.

“I have always told Carlos that he is a nice horse. He can run all day. You work him five-eighths, he goes in a minute and then he wants to keep galloping out to the quarter pole without even blowing.”

Zanotti was bred by Kilboy Estate and Castleton Lyons, the farm near Lexington where the winner’s sire, Gio Ponti, stands for a 2018 fee of $5,000.