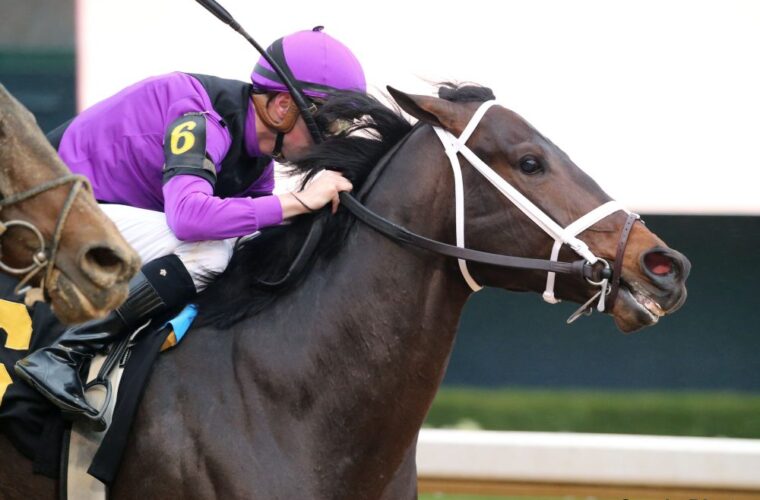 Ten Strike Racing and Madaket Stables’ Warrior’s Charge fought to the finish line and turned back a charging Bankit to win the $500,000 Razorback Handicap (G3) Feb. 17 at Oaklawn Park.

“It’s a tough day, but this horse came out on top,” Cox said. “I was proud of him, he was training well, and he showed up today. I’m very proud of the horse.”

Warrior’s Charge, who finished fourth in the 2019 Preakness Stakes (G1), made his first start back Dec. 18 at Fair Grounds Race Course & Slots where he was a frontrunning winner in a 1 1/16-mile allowance optional claiming event. The 4-year-old Munnings  colt went off as the 3-1 favorite in the Razorback with Florent Geroux in the irons. He went straight for the lead from post 6 and cruised through fractions of :23.69 and :47.85 for the first half-mile. Pioneer Spirit moved to take up the second position, but was knocked back into third by Joevia, who came out from inside to race in second. Pioneer Spirit then moved inside and settled on the rail in third.

As Warrior’s Charge ran three-quarters in 1:12.51, the threats of Snapper Sinclair and Bankit emerged. The two turned for home on the heels of Warrior’s Charge and Pioneer Spirit was just behind them on the rail. Bankit nearly drew even with Warrior’s Charge as the two separated from the field, but the pacesetter found a late gear and dug in to win by a head. The final time for 1 1/16 miles was 1:43 on a fast track.

The winner’s circle was a packed house filled by Ten Strike Racing members, a racing partnership based in Arkansas.

Warrior’s Charge has four wins and three thirds from eight starts. He has earned $565,310. Cox said the colt could return in the March 14 Essex Handicap or April 18 Oaklawn Handicap (G2).

“We’ll keep him here and point for one of those races as long as he comes out of it in good order. He’s a solid horse,” Cox said. “He obviously likes Oaklawn. That means a lot when you’re running on this track and Florent has a lot of confidence in him. Hopefully in the near future he’ll be in this paddock soon, so we’ll see what happens.”

The dark bay or brown colt was bred by Al Shaquab Racing in Florida. He is the first foal out of the Broken Vow mare Battling Brook, who is also the dam of 2-year-old and yearling fillies by Khozan. Al Shaquab purchased Battling Brook while she was carrying Warrior’s Charge for $45,000 from the Select Sales consignment to the 2016 Keeneland January Horses of All Ages Sale.