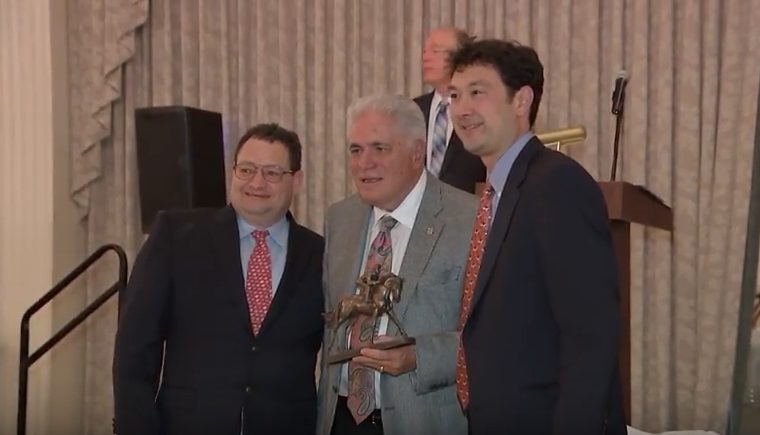 From Past the Wire.

Making the biggest wagering score of his life, Marshall Gramm, an economics professor at Rhodes College and a racehorse owner from Memphis, Tenn., nailed a cold exacta with Authentic and Improbable for $170,250 in the Longines Breeders’ Cup Classic (G1) to propel him to victory last Saturday in the 2020 Breeders’ Cup Betting Challenge.

A big sports fan who grew up in Washington, D.C, Gramm loved “numbers and statistics,” and learned the handicapping game by reading books from noted racing journalist and author Andrew Beyer.

Gramm has played in the BCBC five of the last six years, registering his best finish in 2018, taking fifth place. He has been teaching economics at Rhodes College since 2000 and currently chairs the department. Gramm has taught a course at Rhodes called Economics of Racetrack Wagering Markets, which he describes as a class on “decision making, price discovery and probability.” Along with Clay Sanders, he is also co-managing partner of Ten Strike Racing, a stable that has won 338 races, including stakes winners Dot Matrix, Long on Value and Warrior’s Charge.

Gramm experienced a range of emotions when he learned that he had won the tournament. “When I hit (the exacta), I was thrilled, my biggest score ever. You know you’ve had a great day, but it was nerve-racking, and a relief, and I will always be able to say that I am a BCBC Champion.”

Runner-up Kinchen had nothing but praise for Gramm. “Marshall is a dear friend and I am very happy for him. The BCBC is the Masters of handicapping contests. It’s not all about the money, it’s about the title. I wanted to win, but there are about three people in the world I am ok running second to, and Marshall is one of them.”