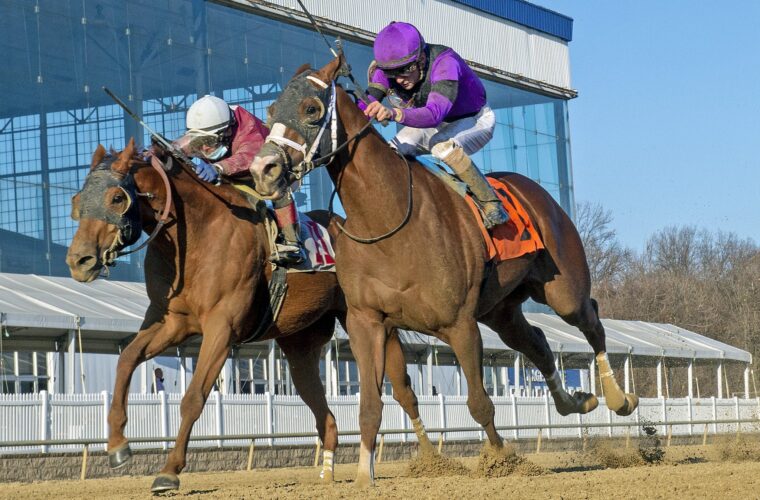 From the Paulick Report.

Ten Strike Racing Whereshetoldmetogo, disqualified from a stakes win in his previous start, outran favored Laki down the stretch and survived a double claim of foul to capture the eighth running of the $100,000 Frank Whiteley.

Laki broke sharply from his outside post but ceded the early lead to longshots Arthur’s Hope and Zenden, in front after a sharp opening quarter-mile in 21.59 seconds. Day the Music Died, who broke a step slow, rushed up the rail to be third with Laki settled in fourth.

Owned in Partnership with Madaket Stables, Michael Kisber and Black Cloud Racing Stable, Whereshetoldmetogo ($9.80), racing in mid-pack early on, began gaining ground quickly along the inside around the turn as the half went in 44.42 seconds and Laki was steered to the far outside. Whereshetoldmetogo and jockey Sheldon Russell split Day the Music Died and Zenden approaching the stretch and took over the lead as Laki swept in to challenge on the outside. The two battled through the lane with Whereshetoldmetogo holding off Frank J. De Francis Dash (G3) winner Laki by a nose.

Both jockey Horacio Karamanos and trainer Damon Dilodovico lodged a claim of foul against Whereshetoldmetogo while fourth-place finisher Charge to Victory claimed against Laki, both incidents coming outside the quarter pole. Both were disallowed.

“We had a good trip. He came up the inside,” winning trainer Brittany Russell said. “I know we had a little issue there and I was hoping we didn’t get DQ’d but it looked like it wasn’t as big of a thing as maybe we originally thought. I felt like our horse was full of run and he’s tough and he’s game and he kept his head down, so I was confident.”

Whereshetoldmetogo was racing third time for Russell, having run fourth in the Sept. 5 Primonetta at Laurel and disqualified to second for lugging in mid-stretch of the Sept. 26 New Castle after hitting the wire 1 ½ lengths in front.