Ten Strike got off to a fast start opening weekend of the Oaklawn Park meeting on January 14th – 16th.

On Sunday, January 15th Ten Strike sent two runners to post in Allowance and Maiden Special Weight events. Homebred Mountain Home (3yo f. by Successful Appeal), named after a small city in Arkansas where two of our partners Gary and Linda Pitts live, she did not disappoint the large crowd there to watch her debut. She set a :22.05 opening quarter under Jon Court followed by a quick :46.06 half mile. She was nailed on the line by Dutch Parrot and finished 2nd beaten a neck. Dutch Parrot had a start under her belt and took advantage of a fast early pace. Mountain Home should be tough to beat next out.

Click here to watch the race replay (She is #7)

Next up was Divine Elegance (4yo f. by Uncle Mo) making her second start off the claim for trainer Randy Matthews. She sat in second position throughout and took over the lead turning for home to pull away by four lengths in the end under Glenn Corbett. The N1X Allowance was a $74,000 race and was Ten Strike’s first win of the 2017 Oaklawn Park meeting.

Click here to watch the race replay (She is #4)

On Monday, January 16th Ten Strike sent out Game Time Decision (4yo f. by Put It Back) owned in partnership with GenStar Thoroughbreds. The filly was claimed for $50,000 on Thanksgiving at Churchill Downs and really flourished under the care of Brad Cox. She sat in fourth position through the opening quarter over a sloppy Oaklawn track. Turning for home she made a strong rally down the lane to win by a neck. This was another N1X Allowance with a $74,000 purse.

Click here to watch the race replay (She is #4)

Congratulations to our partners on a great start to the 2017 Oaklawn meeting! 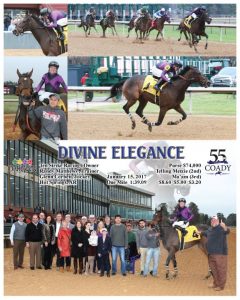